Problems & solutions at ‘The Port Makes the City’ conference

Whenever Marieke Blom talks, I tend to listen. She is the Chief Economist of Dutch bank ING and very good at making complex issues understandable for a broad audience. Focusing both on the Port of Amsterdam and the Dutch port industry in general at ‘The Port Makes The City’ Conference this week (at the site of Damen Shiprepair Amsterdam), she addressed 5 major challenges as well as a few potential solution strategies.

I’ll try to pass on some of her insights here (hoping to have grasped it correctly…).

Here’s a summary of issues challenging the port(s)

Currently the Port of Amsterdam is growing faster than the average economic growth. It generates many new jobs and is a true ‘job-engine’ for the manufacturing industries. However, the economy in which both it and the other ports operate is changing.

1.      De-globalization. Not only is the pace of globalization slowing down (not in the least due to protectionist tendencies in several countries), there is also a trend in several markets to handle more things locally (often inspired by concerns about our environment).

2.      The Technology Economy. Robotization and digitalization are, as we know, on the rise. Additionally, the growth of services leads to a decrease in demand for certain products (while simultaneously there’s an increase in demand for ‘experiences’).

3.      Slow growth of the EU economy. The pace of the European economy is a bit slow. An additional, but related, issue is the fact that its population is growing older. For the Dutch ports, which depend on international market developments and hinterland demand, this situation needs addressing.

4.      The Volatile Economy. The ports are relatively sensitive to the highs and lows of the economic cycle. They also have to deal with many political uncertainties.

5.      The Sustainable Economy. There’s a trend of getting/keeping production closer to home due to a growing wish to reduce the ecological footprint of production and logistical processes. A growing number of businesses see the need for a different trade-off between the benefits of efficient transportation and worldwide environmental aspects.

All this has consequences for the function, position and size of the port’s industries. In general, Ms Blom’s advice to the ports and the companies that are part of them, is to really know (and then use) your talents. Specialise in them. 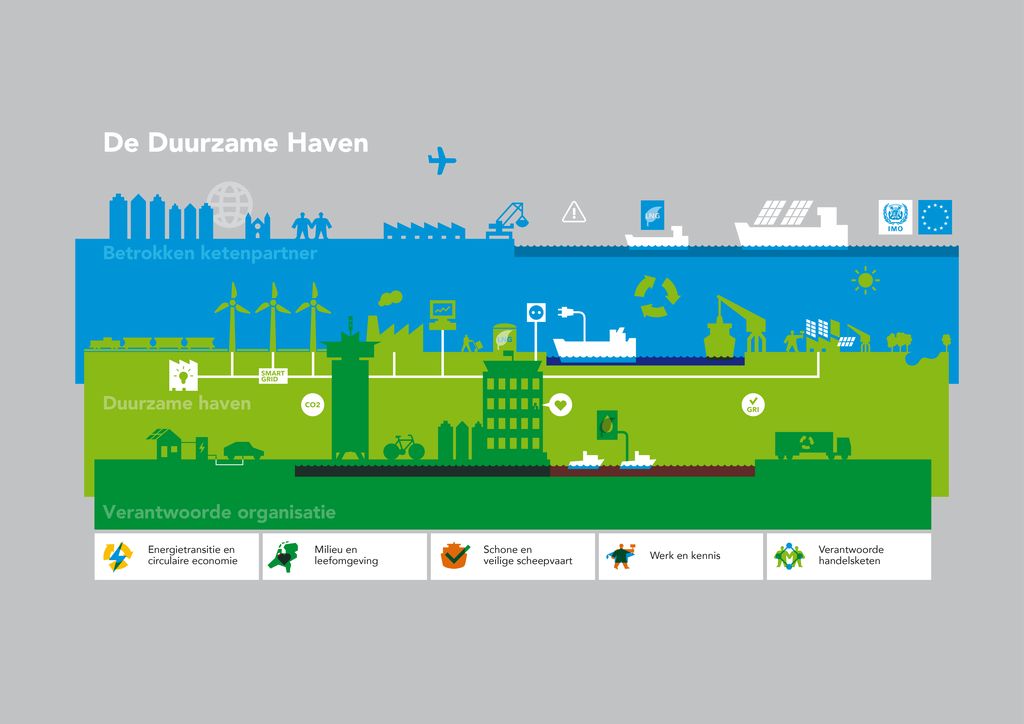 The port in the city

Homing in on the port’s function as an integral part of the city (which was what the conference was about), she offered a number of potential strategies to address the challenges ahead. Interestingly, some of the attending companies are already walking that road.

An example is AEB, which extracts useful materials from trash/waste, generates electricity from waste processing and delivers heating to houses and companies.

There were other speakers at the conference. One whom I’ld like to mention specifically is Ms Kate Raworth, who spoke about the Doughnut Proof Port, a concept I had heard about, but did not know the meaning of. Well, it’s about generative vs extractive enterprise, new business models and economic changes (see the doughnut-shaped economy to learn more).

Of course, some of the speakers and attendees had different visions/arguments than those described above and……you might too! So, should you feel like it, let me know in a comment how you envision the future of the port industry and what needs to be done to get there.

Get on the road to better visibility and findability with the Method of the Maritime Marketeer:

You can do it yourself; it’s just a shift in attitude